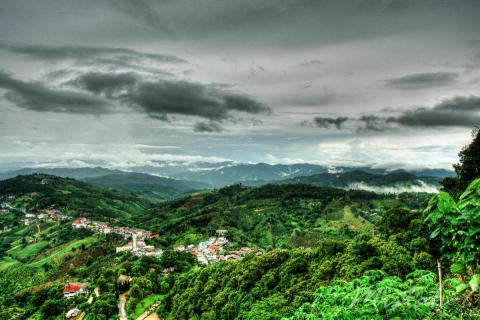 The history of Doi Mae Salong is a little bit wild:

The history of Doi Mae Salong is a little bit wild:

After the Communists took over the mainland of China in 1949 a division of Nationalist Chinese army fled through Yunnan Province to northeast Burma. There they were both fighting the Chinese communists and the Burmese army.

In 1961, 4000 of them got asylum in Thailand and were allowed to settle down on a mountain inside Chiang Rai Province called Mae Salong. In exchange they should help Thai government to fight the communist infiltration in the area.

In 1982 after the force was disbanded, the former soldiers began to lead a civilian life and they started growing tea, fruits, and flowering cherry trees, which transformed the mountain into one of Thailand tourist attractions.

Another inheritance they received is their Yunnanese-Chinese culture that makes the valley even more outstanding.

Most of the area is covered with plantations of tea, coffee and fruit trees, especially a traditional Chinese tea, “Oolong” which brings a good reputation to Doi Mae Salong.

Oolong tea has a distinctive taste and aroma. Its color is between green and black.

In the village, you will find countless teashops that serve you authentic Oolong tea.

The scenery is especially picturesque in November to January when the cherry trees are in full bloom. Scattered with many hilltribe villages, Doi Mae Salong is thus a nice place for trekking.

There is also a very interesting museum in Doi Mae Salong, "The Martyrs' Memorial", a memorial to the KMT soldiers who died in their fight against communism, There you can learn about the history of Kuomintang (KMT), their fighting in Burma, the seven attempts to take Yunnan back, the fights against the Thai communists and much more.

And when you are in Mae Salong, don't miss to go up to the top. You can either walk a couple of hundered steps up to the temples or take the very winding road up there. The road is in very good shape but some parts of the road are very steep! But it is all worth it when you are up there!